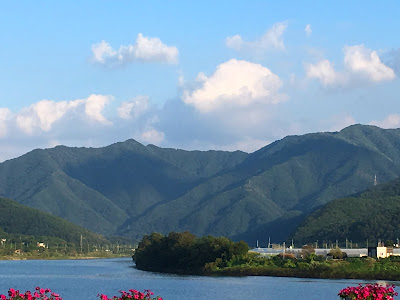 The roads in Gangwon Province all wend through mountains; there’s no such thing as a straight path. “I’ve never lived around mountains before,” I told the English teacher (I will call her "Mrs. Oh," not actually her name) who came to help pick me up from our teacher-training program, as we hurtled north—past Chuncheon, the provincial capital, its apartment complexes and office towers striving in vain against the enormous hills all around. In another half-hour, we reached my town for the year: Hwacheon, a small city of about thirty thousand nestled at the juncture of two rivers, ringed by woods and worn old mountain peaks. Hwacheon’s name comes from Chinese words for “magnificent river,” 華川; the Bukhan River flows through it in its course toward Seoul, where it becomes the Han after merging with the Namhan. It’s the seat of a rural county filled with farms, proud of its annual ice-fishing festival, only ten miles or so from the Demilitarized Zone.

Mrs. Oh explained to me later that since Korean public schoolteachers are rotated between schools every five years, most of the faculty at the Hwacheon schools actually live in Chuncheon to the south and commute north. Chuncheon is a much larger city with more to do, and if you settle there, you stand a better chance of being able to stay in one spot when reassigned, without having to move to another part of the province. “When I started teaching in this area around the time you were born in 1990,” she told me on another occasion, “almost none of the teachers had cars. A lot of the households in the province still used coal-burning furnaces. It was a totally different country then.” Even then, she remembered, in outlying areas families might end their girls’ educations after middle school so that they could do factory work to support the family—especially if they had sons, who were more likely to go to high school.