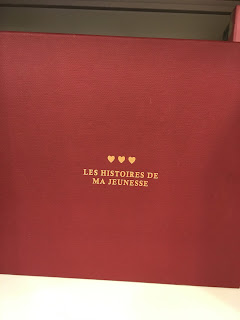 It's everywhere in Korea—on t-shirts, in shop windows, on bags and pencil cases. It doesn't always make sense. Whole sections of bookshops are dedicated to works in translation from it. We can analyze the extent to which this state of affairs is an unsavory artifact of a bygone empire, but most Koreans seem to sincerely think the language is stylish or cool. Yes, in Korea, people just can't get enough of French. 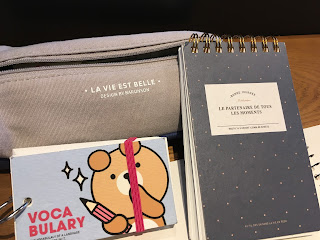 If English has become Korea's go-to second language in this century, there is a good case that French is a surprising contender with Chinese and Japanese for the runner-up spot. Not, perhaps, in terms of people who actually learn the language—as a glimpse at a bookshop's language-learning shelves will suggest—but in terms of sheer presence. The languages of Korea's neighbors are almost absent from consumer goods. Even when Japanese cartoon characters are marketed in Korea, the kana have always been transmuted into hangeul; there's no cool factor there (perhaps because of the imperial past). But French? Everyone loves flaunting little French phrases to show off the Frenchness of things, even when totally gratuitous.

Korea loves French-style bakeries: the two biggest chains are called Tous Les Jours and Paris Baguette. It's not quite French in the end; better to say that the cafés borrow French-style pastry ideas to make a new Franco-Korean bakery culture. Purists will sniff, but I think the combination (fusion? appropriation?) is delightful. Ideas like croissants filled with red bean paste and pistachio pain au chocolat are just delicious. And the brightly colored birthday cakes these bakeries specialize in—often with more emphasis on fruit flavors and much lighter, creamier frosting than their American counterparts—are works of beauty. 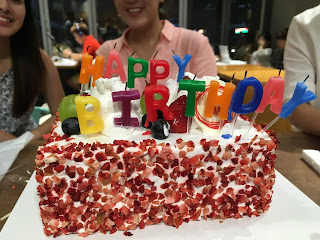 What's interesting to me from a literary point of view is that this seems to seep over into Korean attitudes toward books, too. Korean bookshops carry a lot more contemporary works translated from French than the average American bookshop—even in my little city's modest shop. These books are generally translated straight from French, rather than with English as a "clearinghouse" language (as happens between many other languages: if you're reading Ko Un in Norwegian, the chances are that he went through English first). Korea seems to have a particular obsession with Alain de Botton; more on this another day. 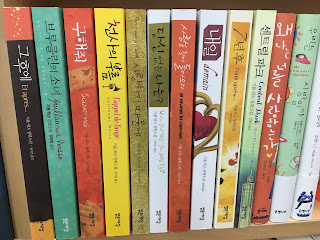 There aren't really any special historical reasons for this love affair, as far as I can tell. Korea never had a special military or technical alliance with France (like Japan's relationship with Germany), nor did it have a French colonial presence (like Britain and Hong Kong) or fall within a generally Francophone sphere. It seems more to be the case that Korea just genuinely likes French culture and its cultural self-projection. Many of the things France loves as little daily aesthetic indulgences—skin care, fresh flowers, nice alcohol, the aforementioned pastries—are also things Korea loves. This decade in particular, perhaps with a sense that the cardinal miseries of the twentieth century are finally dispelled, the South Korean joie de vivre is especially strong. English may be the functional language of hard work here—the language you learn because it's compulsory in school and it's practical in work life—but French is the language of joy, the language you sprinkle onto your daily life out of sheer affection.

Two haircuts are trendy right now, one with boys and the other with girls. There's the "two-block," a kind of stark undercut where a rim of long hair suddenly drops off into a buzz-cut, kind of the opposite of a fade. It's super popular here, but to my eyes has a wince-inducing likeness to the "bowl cuts" inflicted on so many boys (especially Asian boys) by hairdressers in the early nineties. As with so many haircuts, it either works really well on you... unless it doesn't (i.e., if you don't have the looks of a pop star), in which case it looks awful.


Click here to read more »
Posted by Spencer Lee-Lenfield at 12:22 PM No comments: